Effect:This is an amazing self-working card trick performed with a stacked deck. You and the spectator will shuffle and cut the cards. The Aces are then found in a mysterious way by simply spelling them. Next, the Kings are mysteriously found all together. And as a grand finale, the four suits are left to be separated.

This is one of the favorite card tricks of your favorite Seattle Magician, and once you master it, I’m willing to bet it will be near the top of your list as well. Trust me, everyone will be floored! 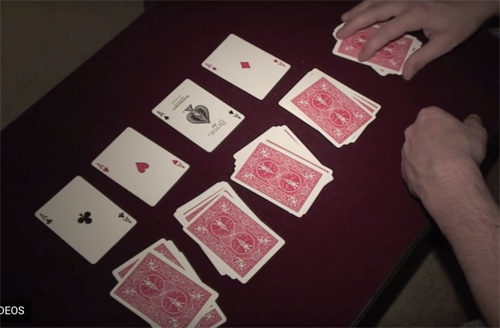 Next, take the Ace of Clubs and place it on the stack of face-down cards below it. Have the spectator freely cut as many cards as they’d like from the pile to the right (under the Ace of Hearts) and place it on top of the ace of clubs. The number of times they cut doesn’t matter.

Now place the Ace of Hearts on top of the face-down pile below it and have the spectator cut from the pile to the right of it and place those cards on the Ace of Hearts. You should now have two face up Aces “mixed” within a bunch of face down cards.

Now collect the piles by taking all the cards on the right-most pile and placing them on the pile to the left. Next, take that pile (should contain the Ace of Spades and Diamonds face up) and place on the ace of hearts. Finally, take that pile (contains the face up ace of hearts, spades and diamonds) and place those on top of the ace of club’s pile.

Feel free to do some false shuffles at this point. Be sure not to disturb the order.

Now spell the ace of diamonds while placing one card after another face down on the table coinciding with each letter.

Continue to do this with each of the Aces in reversed CHSD order (1. Diamonds, 2. Spades, 3. Hearts, 4. Clubs). Be sure to keep all the cards and piles aligned while remaining symmetrical. It’s important to be organized so the illusion is clear to the audience. Everything should be set on the table to appear in a grid configuration.

After spelling each of the Aces, you should have four Kings left in your hand. Place those on top of the each of the aces corresponding to their suite. Be sure to place them at an angle so the aces are still visible. (see below image) 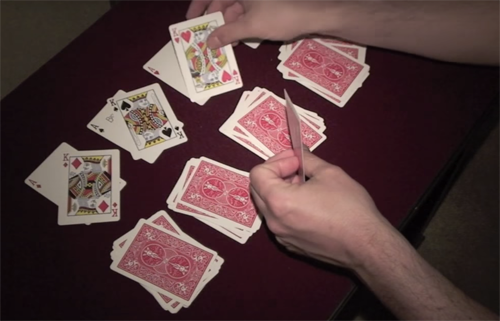 You’re almost done! All you have left is to turn over each of the piles of cards which will all show to be separated by suits. This is an amazing feat to display because you’ve been “shuffling” and the spectator has been “cutting” the entire time!

Enjoy the accolades you receive from your audience. You worked hard to master this trick and you deserve them!