Once again, can I say I love my job?!

my 20+ years as a magician, the most incredible and unique opportunities keep falling in my lap! While I thought my career had peaked in 2012 on stage at America’s Got Talent, I’ve had multiple amazing experiences in just the last few years that I wouldn’t trade for anything. Paddle boat cruise and University of Washington basketball halftime performances are just a couple that come to mind. Well, another experience worthy of that list occurred in February and involved me being in a Hallmark Movie! Let me tell ya all about it:

I received a call from the producers of the movie, “Fashionably Yours” about a week before filming was set to begin. They had already approached a few magicians about the project, but once they heard my idea for the perfect illusion for the scene, they had their man! They explained the setting would be part of an outdoor montage through the Seattle Center with no speaking lines. Their goal was to capture a quick, eye-catching, and hopefully romantic moment. An idea hit me instantly, and without pause, I shared it with them. I suggested an illusion where I make a piece of paper float and then light it on fire. I then reach into the flame and pull out a red rose. Needless to say, the producers loved the idea and I got the part! 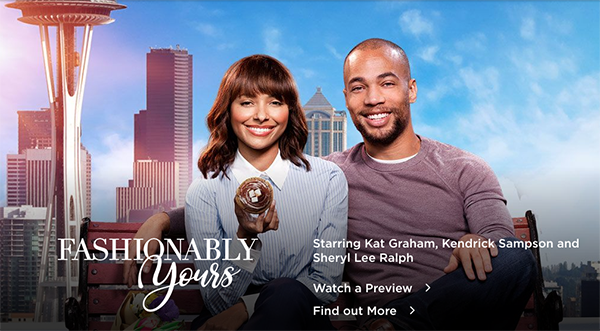 Filming lasted about four hours and involved multiple takes. What comes across on screen as a warm Spring day, was actually a chilly 40-degree day in February. Those of us in the scene found it very convenient that the illusion involved fire! There were several elements to overcome in pulling off the vision the crew had in mind. It was windy, which as you might guess, does not agree well with floating paper or fire. Intermittent cloud cover also caused lighting challenges for the crew. A tough test for yours truly was having my illusions filmed and not having any say in the production. But once I saw the final scene, my worries were washed away, and I was extremely happy with the finished product. By the way, four hours of filming only equals 22 seconds of the actual scene in the movie 😉

While filming the scene was truly a fun and rewarding experience, some of my favorite memories from that day involve the downtime with the cast and crew. The stars of the film, Kat Graham and Kendrick Sampson were wonderful to work with and I enjoyed performing sleight-of-hand magic for several members of the cast and crew.

While Seattle is the setting for the movie, most of it was filmed in British Columbia, Canada. They shot for only two days in Seattle, and I am very happy to have been a part of it!